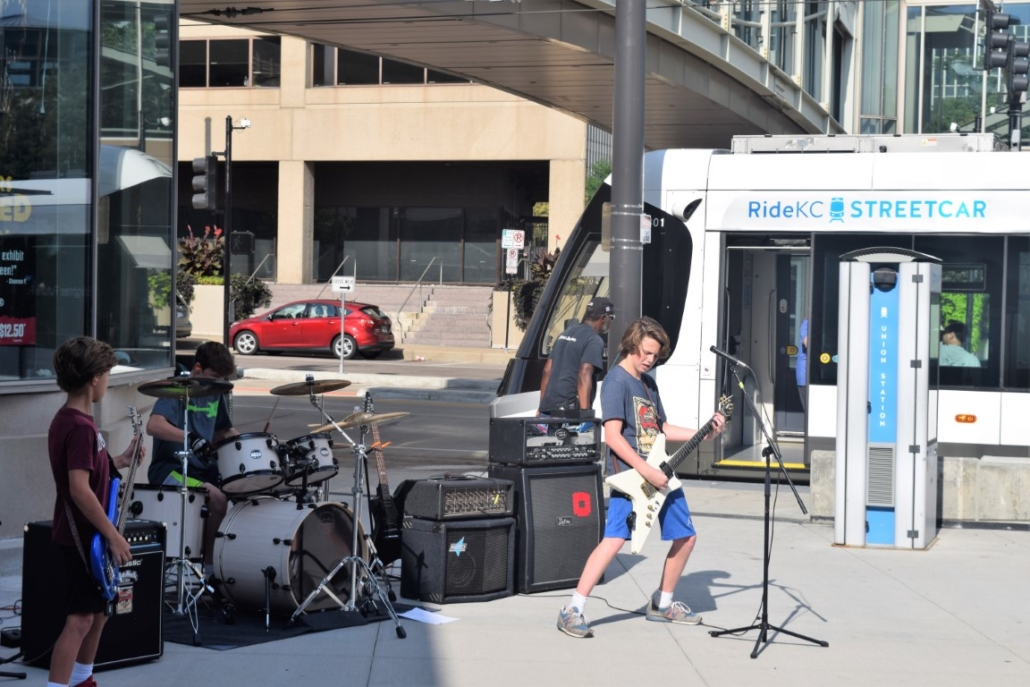 Normally if you hear screams coming up from your basement, its cause for concern. But for Bridget and Luke Ismert, it’s just a normal Tuesday night.

Bridget and Luke are the parents of Henry, Eli, and Abe, the three burgeoning rock stars who have garnered national attention with their heavy metal band Hammerhedd. Henry, 16, plays guitar; he’s got the long hair necessary for some heavy headbanging, and well on his way to mastering Slayer’s Tom Araya’s legendary metal scream. Eli, 14, tells that drum kit who’s boss (hint: he definitely is) while encouraging the insane rhythm his younger brother, Abe, 11, keeps steady while he seriously shreds that bass, all while looking very nonchalant and cool.

Hammerhedd recently played a very loud show outdoors at Union Station, attracting a lot of attention from passersby. It was particularly amusing to watch the faces of people walking by, hearing the insane riffs and technically advanced compositions, and then realizing the band was not mid-30s bearded men, but clean-cut adolescents. The surprise people feel when seeing and hearing Hammerhedd play comes not from their age, but more from their age combined with their undeniable talent and dedication to their craft; they take their music seriously and expect their audience to as well.

At Union Station, Hammerhedd played the entirety of their forthcoming debut EP Essence Of Iron, due out in the fall of 2018. After their insane 2-hour set, they still agreed to have a conversation with me, because hey! they’re young and full of energy. 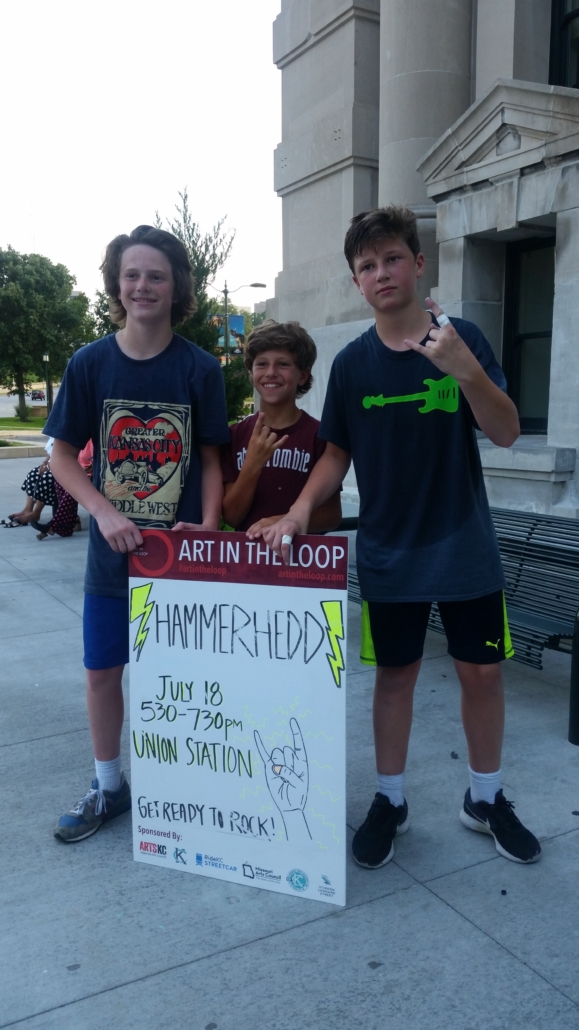 Tell me a little about yourselves, your interests, etc.
Henry: We just like to do things other kids do, hang out with our friends, sports.
Abe: I like baseball.
Mom: You guys play a lot of ping-pong too.

How did you guys get started playing music?
Eli: Around five years ago our uncle let me try out his drum set and I loved it.
Henry: Our dad has a band too, they don’t like play around, but jam together and stuff. I started on the guitar because it seemed like the obvious choice.
Abe: They both [his brothers] played something, so I played bass.

What kind of music do your parents listen to? Are they influencers on your musical taste?
Abe: Dad’s whole family plays music.
Henry: Dad is into Metallica, he likes other stuff too, like us. But he thought we’d really like them and Led Zeppelin and Rush.
Eli: Mom doesn’t really get into the heavy music as much.

What kind of response do you get from the community and your neighbors?
Abe: Our friends come over, see our equipment, and they want to play.
Henry: Our neighbors love it.
Eli: Yeah, they’re pretty cool.
Mom: The way our houses are positioned the sound doesn’t travel very much, but we did move their space into the basement so they could play as loud as they wanted without disturbing everyone.
Eli: We have an 11-9 rule, we don’t play after 9pm, that’s just rude.

Tell me about your new EP, Essence of Iron.
Eli: We decided to do it on our own, it was our idea.
Henry: We had been making a bunch of songs, these are the ones we liked the best.
Abe: We had been doing covers at gigs, and people always ask if we play any originals, so now we do.
Mom: It has been a long, expensive, and educational process. Dan Whitmer is the sound engineer, he has been really helpful.
Henry: Yeah, Dan has all the connections and is very knowledgeable. A shout-out to Josh Cole, who did the mixing, and David Sanchez from Havok. It was really cool, we opened for Havok, and he reached out to us and asked if he could help us with an EP.

Are you guys nervous for the release?
Henry: I feel pretty good about it. Someone posted a video of us performing our new stuff, and it already has over 3 million views.

What are you going to do with those fat paychecks that come rolling in?
Eli: Haha, no idea.
Henry: Organize a world tour, Asia first. Oh yeah, and new instruments.
Abe: Save it for college, and I want a batting cage.

Are you going to send a copy of the Essence of Iron EP to Metallica?
Henry: That’s a good idea!!
Eli: We should!

Is music something you want to continue to pursue through life?
Eli: Oh yeah, definitely.
Henry: Yeah, but with the same people. I want to play with my brothers.
Mom: They play off each other so well, almost like how twins communicate, anticipating each other. I think at this point it would be strange for them to not play with each other. It’s great too, I mean, anything that they want to do together.

So can we talk about the Ellen show and the other national opportunities that you as a family decided to turn down?
Henry: It all started when we played outside on the Plaza and someone posted a video on YouTube. It’s had over 22 million views since then, and when my mom’s friend called and told us about it, it was crazy.
Eli: Hahaha, yeah you [Henry] came in the house screaming.
Mom: It was insane, and shortly after that is when the national programs began calling. I feel like everyone thinks I hate Ellen because we didn’t let them perform on her show. I love Ellen, she’s great, and it was really the only show we seriously considered. But you have to understand as a parent how surreal it is to see your young children all over the internet. I was afraid for awhile we were going to have people coming up to our door, so we kind of hunched down at home and did other things. They are kids, and sometimes I think people forget that and that they do other things besides play music together. We have a daughter too, and she just kind of got thrown into the craziness of it all.
Eli: Everyone would have seen it too if we had gone on those shows. If we had done it and saw it now, I’m sure we’d be cringing.
Abe/Henry: Yeah, for sure.
Mom: They didn’t want to go on a contest show, that’s not the kind of band they are. They want to be taken seriously, this is what they want to do in life. When Ellen called, we considered it, we really did. That opportunity I was all for, but in the end, we decided against it, and in retrospect, I think we made the right choice.
Henry: When it happened though, it was awful. I wanted to go on TV and play.
Mom: They were mad. Their dad and I spent a lot of time considering it and questioning if we had made the right choice.
Eli: We weren’t ready, I’m glad we didn’t do it.

What was it like at school after the YouTube video came out?
Abe: A lot of people saw the first video; my teacher at school put the article from the newspaper up on the wall in our classroom, so embarrassing.
Eli: Henry and I watched it in class, it was brutal.
Mom: Their age group isn’t really into what they play, especially a few years ago when it all began.

If you could open for any band, who would it be?
Henry: Gojira!
Eli: Powertip
Abe: Avett Brothers

Any advice for kids who want to be musicians and do what you do?
Abe: Don’t take lessons.
Mom: Some kids need lessons, it’s different for everyone.
Henry: Pick up an instrument; never listen to the radio, its all garbage. Hollywood and the radio, all garbage.
Eli: If you really like what you play, you’ll do it, and get good at it.
Mom: Get a friend and jam.

For more information about Hammerhedd, performance dates, and their debut album, Essence of Iron, check out their website here. 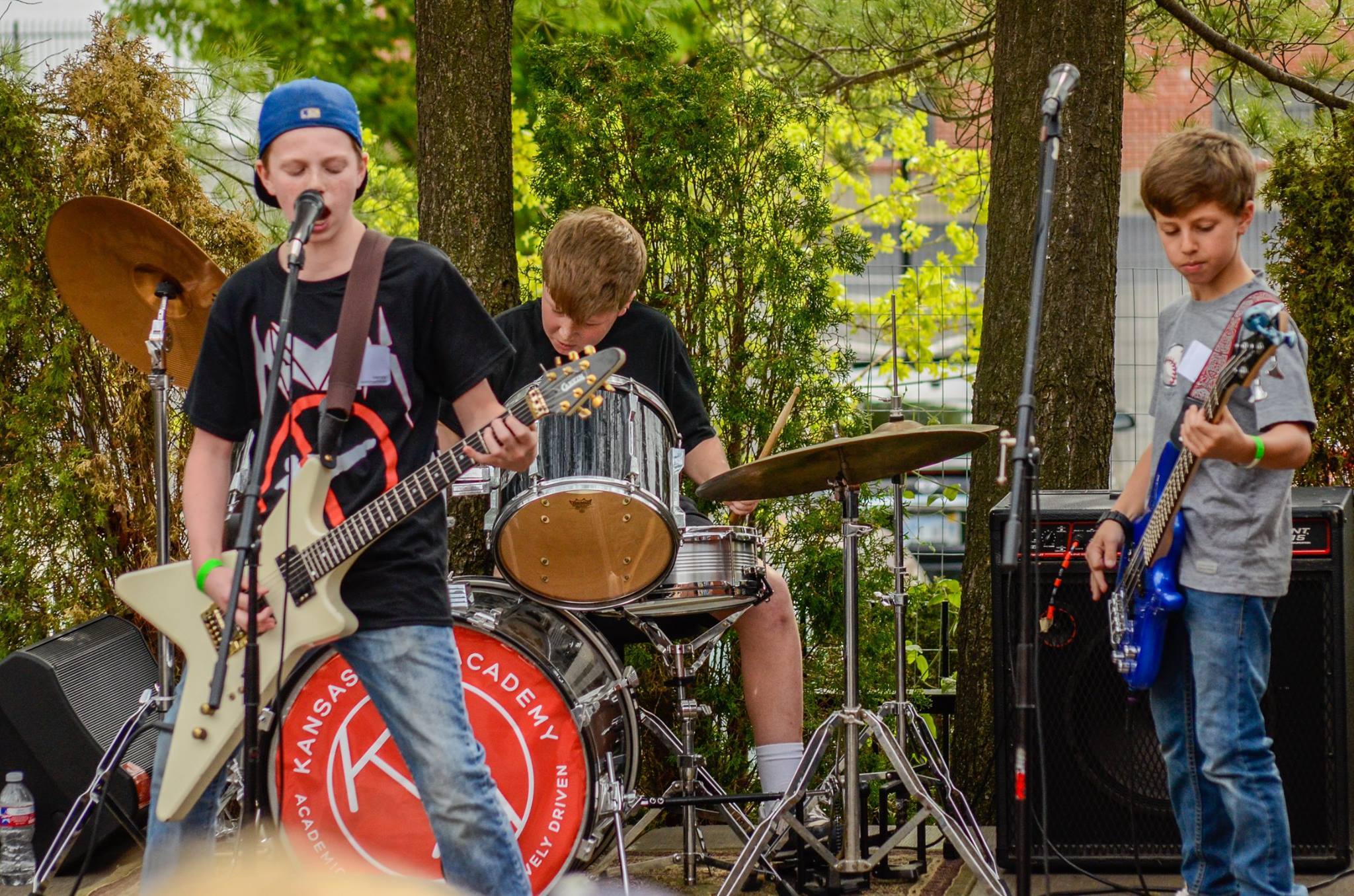 b.hive playback theater is a great way to kick off

The party is in the park tonight! Get down to Oppe

There is a new way to support Art in the Loop! Th

Last night, 150 guests attended the Art in the Loo

Deadline for the 2022 Art in the Loop Performances 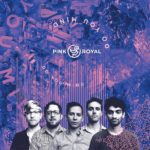