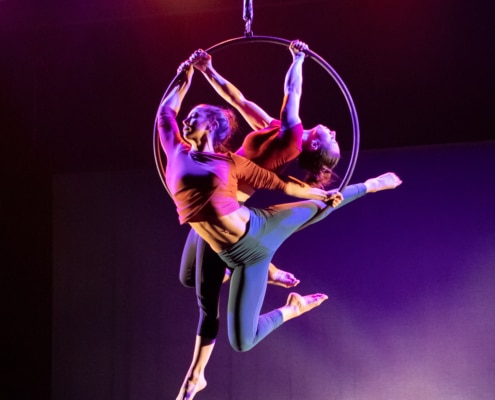 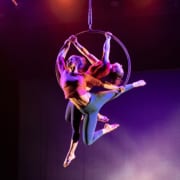 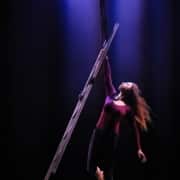 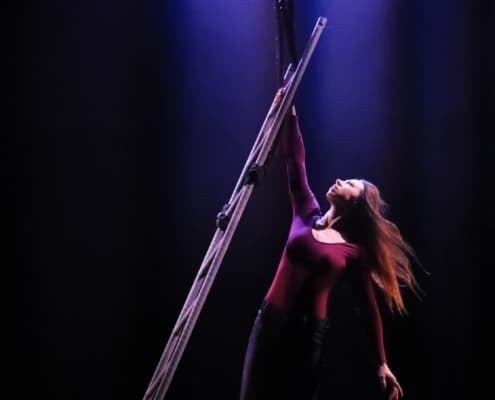 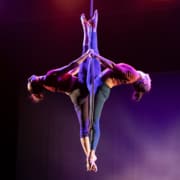 With a background in screenwriting, Kelsey Aicher is interested in how aerial acrobatics can be a vehicle for story telling. She created her own aerial arts performance company, Circus Scorpius, to find ways of combining her interests of directing, writing, and performing. The fusion of these interests is held together by Aicher’s dedication to creating thoughtful performances expressed through the movements of thoughtfully written characters. Aerial arts is a performance that requires a great deal of physical ability, dexterity, and balance. Complex maneuvers and feats of athleticism are dazzling enough, but when these acrobatic gestures become a language that describes an intricate story, with interesting characters, the combination of stunts and compelling narrative fuse together perfectly.

When Kelsey began writing circus stage shows in 2017, she had no desire to direct, believing she lacked the confidence and the vision. After seeing three of her shows brought to life and how much she loved providing artistic input when asked, Kelsey grew curious. She took a chance on herself, asking to direct a student show with Kansas City Aerial Arts’ Training Company. In April 2019, she made her directoral debut with Masked!: A Superhero Love Story. Since then, she has directed three other student shows and has received two “Best Show” honors at KC Fringe Festival.

In November 2021, she directed her first professional-level circus show with Aerheart KC Circus Company. The show, n0rmal, was an incredibly important creation for Kelsey as it tackled the topic of the prevelance of mental health disorders and suicide in America (read a review). It was highly personal not only for her, but for many of the performers and even the audience members. It was also while working on n0rmal that Kelsey realized the importance of having complete agency over her voice and art. The experience encouraged her to form her own performance company, Circus Scorpius.

The Black Creatures
Scroll to top