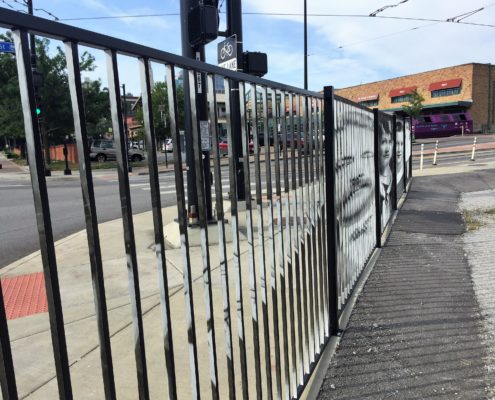 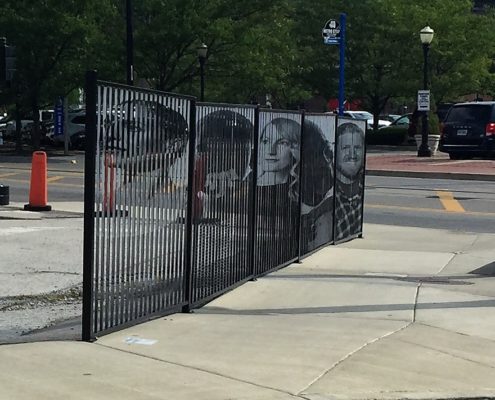 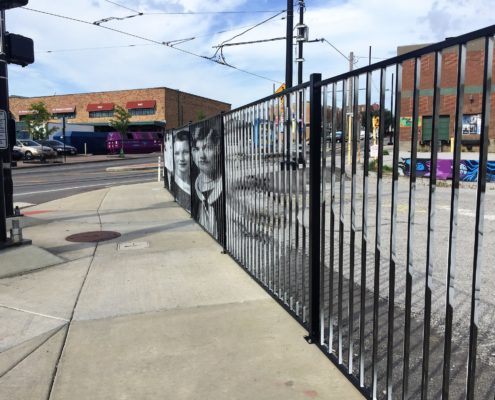 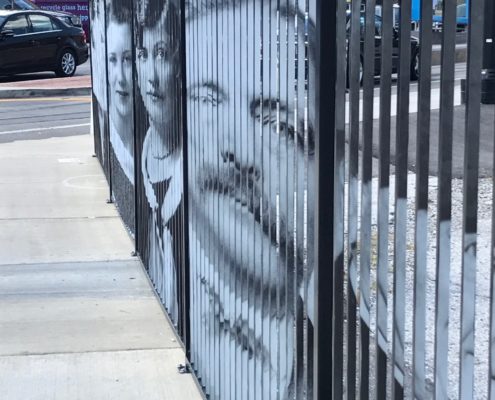 Then & Now: Faces of KC is a collaborative work between Lauren Thompson and Jeff Evrard. The piece is an optical piece installed on the exterior sides of pickets on a fence. An image is seen on the fence when viewing the fence from an angle. With each installation, there is an opportunity to notice two images, each image being seen individually from their respective directions. With two images installed, pedestrians will see one image as they approach the fence, then as they pass the fence, if they look behind them, they will see the second image. This morphing of one image to the next, can be utilized to develop a deeper meaning and connection between the images.

The paired images depict notable individuals, who have contributed significantly to the growth and culture of Kansas City.  Each pair consists of a person from the past, and one from the present time, whose work and/or accomplishments are similar.  We invite you to further research these individuals, as an opportunity to learn about the contributions of just a few of the many historically remarkable Kansas City residents.  The paired images are as follows:

Jennifer Owen/Adele McHatton:   Jennifer Owen is a dancer, choreographer, and co-founder/artistic director of the Owen/Cox Dance Group (www.owencoxdance.com).  Adele McHatton was a dancer, who made a name for herself in Broadway productions during the 1920s.

Rasheedat Badejo/Ruth Warrick:  Rasheedat “Ras” Badejo is a local playwright, actress, and UMKC Theater Performance graduate.  She has performed in many local productions to high acclaim. (www.thecoterie.org).  Ruth Warrick initially achieved fame as Mrs. Kane in Citizen Kane.  She appeared in numerous movies and stage productions, but is perhaps most well-known for her long-standing role as Phoebe Tyler Wallingford on the soap-opera All My Children.

Jennifer Lapka Pfeifer/Nelly Donnelly:  Jennifer Lapka Pfeifer is the founder and president of Rightfully Sewn, a Kansas City-based organization that seeks to provide seamstress training to at-risk women in order to promote local success in fine garment design and manufacturing (www.rightfullysewn.org).  Nelly Donnelly, who was a prominent garment designer and manufacturer from the 1920s – 1950s, is credited with establishing Kansas City as a successful “ready to wear” design center.

Ryan Maybee/Tom Pendergast:  Ryan Maybee is an accomplished fine wine specialist, craft cocktail inventor, and restaurateur.  He is currently owner of Manifesto, a specialty cocktail bar located within the Rieger Hotel, of which he is also part-owner (www.theriegerkc.com).   Tom Pendergast was a clouty political boss in Kansas City in the 1920s and 1930s.  He briefly served as a city alderman, but is most well known for his anti-prohibition stance and various “vice-centered” business endeavors, both legal and illegal.  He frequented several “speakeasy” establishments in Kansas City, including that which is now the Rieger Hotel.

The juxtaposition of two images and the transition of one image to another serve to symbolize how roles have changed in Kansas City. In the day to day activities of our lives, it can be easy to miss or undervalue the small steps we take towards making our community more inclusive and diverse. We hope that by showing the results of our community’s work, people will stay inspired to continue to engage in the small acts that keep our community growing.

Lauren holds degrees in dance, psychology, and women and gender studies as well as an advanced degree in counseling and guidance. She also has training as a yoga and Pilates instructor and owns a Pilates studio in downtown Kansas City. Her work at her studio is where she combines her knowledge of working with the human body and mind to help her clients achieve an improved sense of health. In addition to her work with her clients, Lauren also uses her studio to work on her choreography. Her choreography often centers around the common human experience and healing movements she has been introduced to through yoga and Pilates. In the past year, Lauren has started to explore the world of public installations. Her work is often interactive and encourages people to connect with their environment. 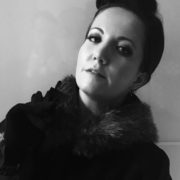